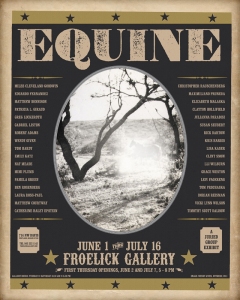 Last night was the opening reception for the Froelick Gallery group show, Equine. I am fortune that my painting Twenty-Oneis included among the work of many accomplished artists. Tonight is First Thursday, and there is a reception for the show from 5:00 pm until 8:00 pm. The show runs all of June, through July 16, 2011.

The painting Twenty-One is inspired by the prehistoric drawings found on the walls of the Chauvet-Pont-d’Arc Cave in France. These drawings, made before humans possessed written language, are the earliest known record of primordial expression, and they are images of horses. Later, humans learned to use symbols instead of pictures to create words. Inspired by the transition of pictorial language into words, the repetitive form of grazing horses in Twenty-One suggests ancient cuneiform. Impressed by stylus into clay tablets, cuneiform script marks the abstraction of pictorial expression into symbolic characters. It is the precursor of the modern  alphabet.

JParadisi RN, OCN is a multidisciplinary artist with a focus in painting and writing. Her paintings and short stories have been published nationally. She has exhibited artwork in galleries throughout the Pacific Northwest. Julianna is a frequent contributor to Off The Charts, the blog of the American Journal of Nursing as a blogger and illustrator. View all posts by jparadisirn

Names and identifying details of people mentioned have been changed to protect their privacy.
No information posted on this site should be interpreted as medical advice. If you have questions regarding personal health issues, please consult your licensed medical practitioner. If this is an emergency, call 911.
Views expressed in the comments represent those of their authors and are not necessarily of JParadisiRN. They should not be interpreted as advice, medical or otherwise from the author of this blog.

© Julianna Paradisi and JParadisiRN.com, 2009- 2021. Unauthorized use and/or duplication of this material without express and written permission from this blog’s author and/or owner is strictly prohibited. Excerpts and links may be used, provided that full and clear credit is given to Julianna Paradisi and JParadisiRN.com with appropriate and specific direction to the original content.