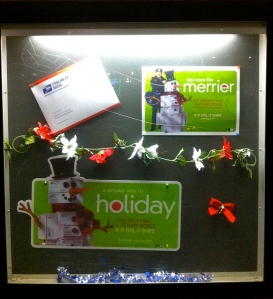 If It Fits It Ships photo: jparadisi 2010

Trudging out of an Oregon rainstorm into the Post Office, I found a line of 30 people like me with Christmas packages to mail. In a poorly ventilated building, a crowd of wet people smells like wet dogs, but less so. John Lennon’s voice sounded scratchy singing “And so this is Christmas” from a poor quality speaker. I knew the late afternoon was a bad time to go, but I’ve never been a morning person, a characteristic that served me well for twelve years of night shifts.  I started thinking that a busy hospital is a model for Post Office chaos during the holiday season. Each type of health care provider or patient personalities exists in this parallel universe, the Post Office.

For example, attempting to speed things up, a woman wearing a name badge triaged the swelling line of package bearing humanity, asking who needs insurance forms to fill out. Someone at the back of the line asks her what time the Post Office closes. She says she doesn’t know, because she usually doesn’t work in this area. Apparently postal workers float to unfamiliar departments like nurses do during staffing shortages.

In front of me, a woman with silver hair converses with a younger woman. I suspect the silver-haired woman is a retired nurse, because she hands out an endless supply of clicky-pens to other customers in the line in need of writing implements, then pulls a Sharpie out of the same pocket for her own use. The younger woman has long hair pulled back in a barrette. She is sans makeup and wears what we call in Oregon, “tree-hugger” shoes. She is overweight, but kindly attentive to the silver-haired woman. While she speaks, a similar looking man I take for her husband appears and gives her a peck on the mouth. It makes me happy.

I watch a woman wrapping packages in tissue paper and bar code stickers. In front of her, a man loudly complains on a cell phone, “Those #$*#-ing doctors give you a bunch of pills and then you can’t get a hold of them!” He never stops talking the entire time the clerk processes his packages. When he’s finished, she says “Merry Christmas, Sir”, which I think is more than he deserves.

Finally, it’s my turn. Oh no, it’s that clerk, the one who is Newman to my Jerry Seinfeld. She annoys the hell out of me because she doesn’t ask if the contents of a package are dangerous, instead she asks, “What’s in the package?” Once, David and I got into a disagreement when he told her what was in my package. I insisted she was violating my privacy. I’m not special: In the past, I’ve heard her say rude things to other customers and her coworkers too. I brace myself for the encounter, because I have to get these damn packages in the mail in time for Christmas and I’ve been in line for an hour.

She does not ask what’s in my packages. “Anything hazardous, flammable, toxic or a combination thereof?” is all she asks. I say “No.” “How do you want this posted?” she asks. I say “First class,” but she informs me that anything over 13 ounces cannot be First Class. “Priority?” I say as nicely as possible. She pulls out some tape, and fixes a loose corner on one of my packages. “Sorry,” I say, “I never get it perfect.” “Forget perfect, my dear,” she says to me while I pay for the postage. Then she hands me a candy cane. “It’s always a pleasure to serve someone who comes in with a smile. Merry Christmas.”

JParadisi RN, OCN is a multidisciplinary artist with a focus in painting and writing. Her paintings and short stories have been published nationally. She has exhibited artwork in galleries throughout the Pacific Northwest. Julianna is a frequent contributor to Off The Charts, the blog of the American Journal of Nursing as a blogger and illustrator. View all posts by jparadisirn

Names and identifying details of people mentioned have been changed to protect their privacy.
No information posted on this site should be interpreted as medical advice. If you have questions regarding personal health issues, please consult your licensed medical practitioner. If this is an emergency, call 911.
Views expressed in the comments represent those of their authors and are not necessarily of JParadisiRN. They should not be interpreted as advice, medical or otherwise from the author of this blog.

© Julianna Paradisi and JParadisiRN.com, 2009- 2021. Unauthorized use and/or duplication of this material without express and written permission from this blog’s author and/or owner is strictly prohibited. Excerpts and links may be used, provided that full and clear credit is given to Julianna Paradisi and JParadisiRN.com with appropriate and specific direction to the original content.